The beach town  of Santos had one of its proudest moments yesterday when Edson Arantes do Nascimento rode on a streetcar trolley into the opening ceremony of The Pelé Museum. The wild , emotional applause was genuine, after all, Pele’ is probably the person who made Santos a world wide famous city.

Pelé posing for a photo

It was an invitation only event and  had over 300 people present including the vice president of Brazil, Michel Temer,  and the mayor of Santos, Paulo A Barbosa.The museum takes up  4,000 square meters in a complex inside Santos’ old town in  a renovated historic building, and houses more than 2,500 items related to his career, including trophies, jerseys, photos and other memorabilia.

Pelé told the journalists and guests that assembling all his mementos into one place was a dream come true and that he was proud to represent his city and country.

Memorabilia does bring back a lot of memories

“In 1958, no one knew Brazil.  And today,  everyone’s here at the inauguration of my museum,” he said at the podium. “Now we’re getting the Cup of all Cups and all eyes are on us here.” 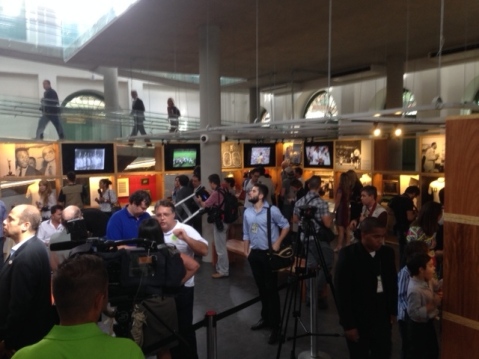